This is the easiest playdough recipe. Don’t want to cook your playdough? Don’t worry, we’ve got a recipe for that! This no cook playdough works nearly as well as cooked playdough and you don’t need a stove at all (well, you need something to boil the water on/in)! 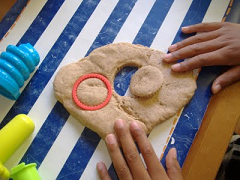 This is as simple as a playdough recipe will ever get. Mix together and enjoy! Extended directions for No Cook Playdough Recipe This playdough recipe doesn’t end with you cooking it in a pan, you do however need boiling (or close to) water when making it.

I began by collecting all the ingredients. The flour, salt, water, oil, cream of tartar and food coloring. The food coloring is optional but it makes the finished playdough look more fun. 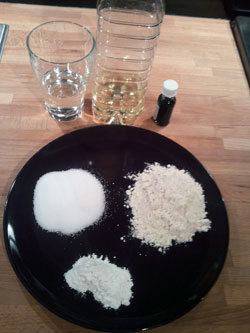 Pour all ingredients into a bowl, except for the water. Like the image below. When the water is boiling, add that too. You don’t have to be careful, just add all at once.

After some initial stiring it will look like below. Looks a bit lumpy, but don’t worry, just keep stiring. 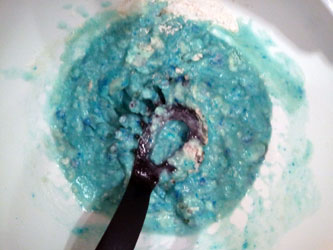 After some more stiring the lumps are gone and you should basically have some finished playdough. This attempt wasn’t 100% successful though, since the playdough is way too sticky. 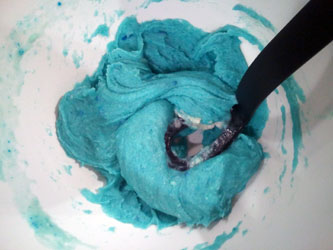 If you thought this batch of playdough was lost, think again, we can easily solve the problem with sticky playdough. We just add some more flour and knead for a few seconds. 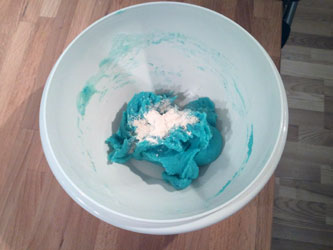 When the playdough is finished, it will look as blue and nice as the image below. Good luck! 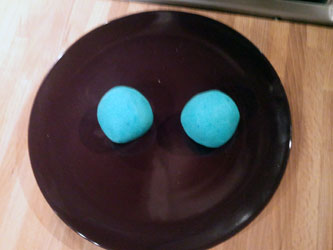 52 thoughts on “No Cook Playdough Recipe”